My daughter has been asking to have a lemonade stand since last summer, so it was a must on our 2018 Summer Bucket List.  I saw some cute DIY ideas using wooden crates and thought that we would give it a go.  I found the best deal for wooden crates at our local Michael’s Store.  My husband had a 36″ x 10″ board cut at The Home Depot.  I purchased two different sizes of nails,  1-1/4 inches for the thicker parts and 3/4 inches for the thinner wood slats, and went to work.  You can watch my video tutorial for more details on the building process.

Hobby Lobby recently had a huge clearance on their summer stock, so I was able to get two giant yellow pinwheels for just $4 each.  They made the cutest sides to hang a LEMONADE banner on.  I used my Cricut Expression 2 to cut out the letters for the banner and hung it with twine.  A few material scraps cut into triangles made for a mini pennant banner to hang along one of the crates.  I created an “Ice Cold Lemonade” sign, a price list for some treats that we made, and lemon cupcake toppers that you can print off here  Lemonade Stand Printables PDF

My daughter loves to dance, and every summer her dance studio holds a week long dance camp.  We decided that selling lemonade & treats would be a great way for her to earn the $125 tuition for camp.  On a Friday evening, we made a batch of cupcakes and marshmallow pops.  I have included the lemon template I used for the candy melt lemons.  Lemon Template pdf  (See some of my marshmallow pop videos for instructions on how to create themed mallow pops)

On Saturday and Sunday, my girl held lemonade stands in our driveway, and not only did she have the best time selling lemonade and sweet treats, she earned $129 in two mornings thanks to the generosity and support of our amazing friends and neighbors.  I will never forget the joy on her face when she walked into the dance studio on that Monday morning and paid her entire tuition in full with money she had earned herself.  Lemonade stand success!!!

I am so pleased with the way our DIY Lemonade Stand turned out, and have been thinking of other uses for it.  Of course she can always use it for imaginary play, but I’m sure we will also use it for birthday parties in the future, bake sales, donuts and juice during our garage sale, and of course, many many more lemonade stands. 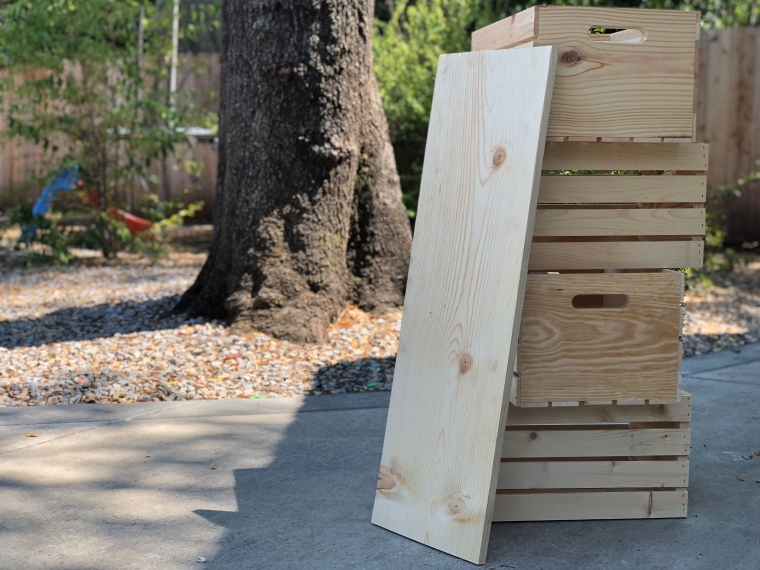 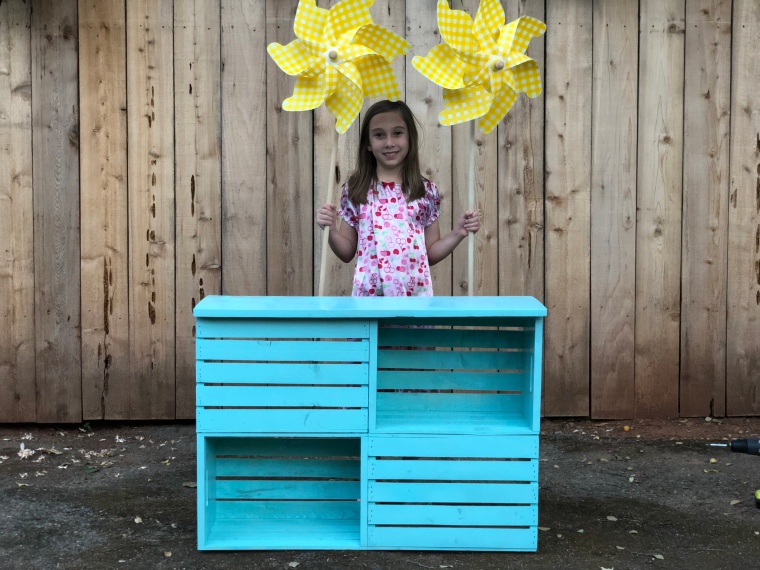 At the beginning of this summer, we spent a day at The Tech Museum of Innovation in San Jose, CA.  If you’ve never been there, it is such a fun experience with tons of hands on exhibits.  One of my daughter’s favorites was a wall with plastic magnetic tubes to create a “marble track” and little balls to test it out on.  She spent quite awhile rearranging the tubes to make different tracks and trying them out.  As I watched her, I started thinking about how I could make something similar at home, and this idea was born.

I began saving toilet paper and paper towel rolls and waiting for just the right time to create our DIY Magnetic Marble Track.  This Saturday was the perfect day!  My oldest was away at camp with his youth group and my two younger kids were having a pajama day.  My husband was taking a nap and the kids were getting “bored,” so together we created this super fun “boredom buster!”

Check out my daughter’s “Craft Time With Karis” video tutorial (above) to learn how to make these with your own kids.  It took some trial and error, but we figured out the best way to keep the tracks up and the best balls to use.  Here are a couple of tips:

For more “Craft Time With Karis” videos click on the following:

Tricky Hopscotch (with a twist)

We are currently soaking up any sunny day we get in the midst of this very rainy season. Sidewalk chalk has always been a favorite backyard activity for my kids and I recently introduced my daughter to hopscotch.  We started with your traditional, schoolyard, 10 space hopscotch, but my girl wanted to make a bigger one.  Over time, we developed a super fun “Tricky Hopscotch with a Twist” that we would like to share with you.

Check out my daughter’s second “Craft Time with Karis” video where she shares her ideas on how to create a “Tricky Tricky Hopscotch.”  Karis adds silly spaces in the middle of the basic numbered squares.  In some, she acts like a cat, or a dog, in others she will dance or dab.  The best part about this, is that kids use their imaginations and creativity to come up with their own unique hopscotch.  This one simple activity combines art,  writing numbers, counting, imaginary play, and exercise.

Leave Karis a comment and let her know if you made a “Tricky Tricky Hopscotch” of your own and what creative spaces you added to yours!

Today I’m introducing a new series on Kerri Creates called “Craft Time with Karis.”  So many of my crafting inspirations have to do with my kids, so I thought it would be fun to bring my daughter in as my little crafting sidekick!  She’s always up for an art project and I love providing creative opportunities for her.

“Craft Time With Karis” debuts with a simple and inexpensive Valentine Craft that we put together with a few things we already had around our house…cookie cutters, paint, and paper bags.  Enjoy this little video tutorial we created, and subscribe to our youtube channel for up and coming “Craft Time With Karis” videos.

New Year’s Eve is always a much anticipated night for our family.  It is, of course, the one night a year that my little night owls are given permission to stay up until midnight!  We started the tradition of celebrating a “family friendly” New Year’s Eve a couple of years ago.  Some years we have joined together with other families.  This year it was just the 5 of us at home for the evening.

I kept things inexpensive by hitting up our local Dollar Tree for supplies, and then I went to work.  I already had paper bags, card stock, and glue sticks, so our “On the Hour Bags” didn’t cost a dime!  My plan was to start our evening festivities at 6:00, so I made a bag for each hour from 6:00 pm – Midnight.  I googled “free printable clock templates” and then added the clock hands to each one before printing them out onto white card stock.  I traced around a bowl to get perfect circles on the shiny blue and sparkly card stock behind the clocks.  A few finishing touches later, and the bags were done.

What was in each bag?  Each bag contained something that had to do with the activity for that hour.

6:00 pm: Time Capsule Printouts & A Mason Jar     We started a new tradition this year, and it was a huge hit!  I looked up some ideas for the time capsule template on Pinterest, and then created my own for our family.  We began our evening by sitting at the table together and filling in our favorites, reflections from 2016, & resolutions for 2017.  Then we read them to each other, rolled them up and placed them in a mason jar.  Our plan is to open them up on New Year’s Eve 2017, read them together, and then create a new time capsule.  I’m pretty sure this will continue to be a treasured tradition. 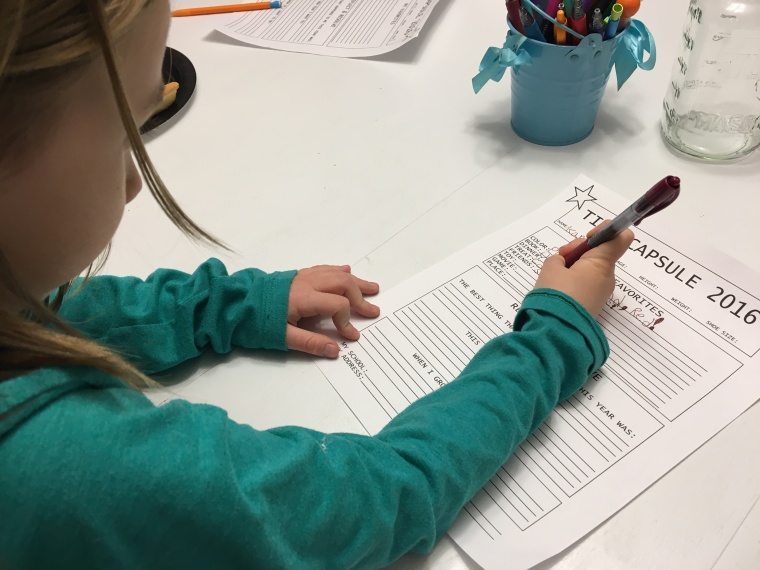 7:00 pm: Glow Sticks & Balloons     This was SO….MUCH….FUN!  We put glow sticks in balloons and then had an epic living room battle.  Boys vs. Girls with Dad as the DJ.  We turned off all the lights and made a line of glow sticks dividing the floor in half, girls on one side, boys on the other, with 6 glowing balloons on each side.  When Dad played the music, we would try to get all the balloons onto the opposing side.  When the music stopped the team with the least balloon on their side was the winner.  The girls started off strong, but after 5 rounds, the boys were the ultimate winners!  I’m telling you…I haven’t laughed that hard in a long time! 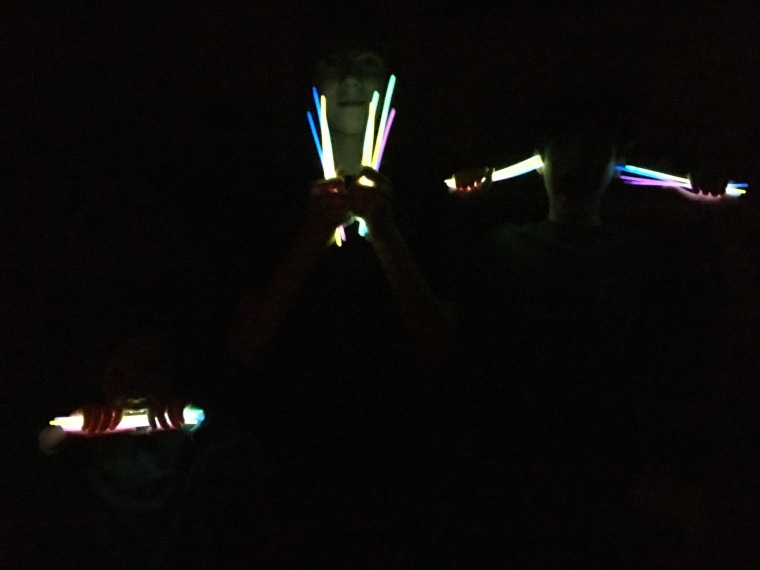 8:00 pm: Popcorn & A Red Box Movie     Popcorn and movie nights are a family favorite for us, and my kids really wanted to see the movie Storks!  Perfect for one of our New Year’s Eve activities! 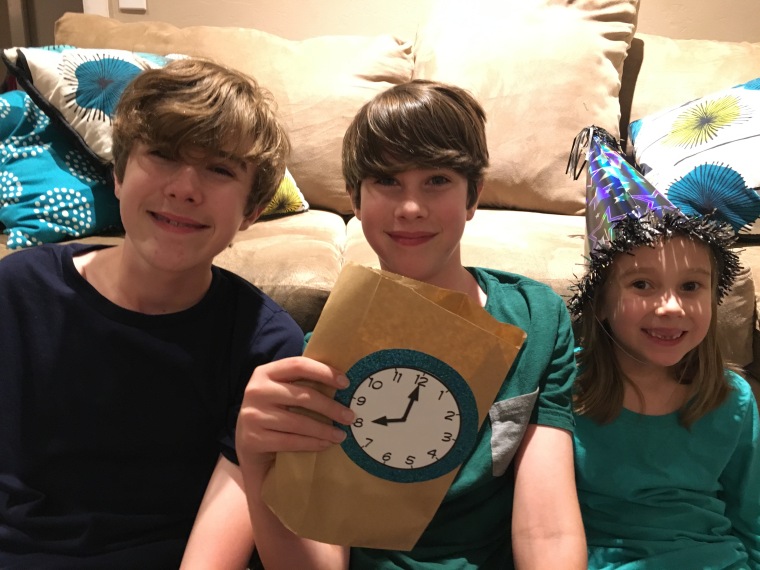 9:00 pm: Gummy Worms with a “Dessert Break” note attached     We took an intermission from the movie to get dessert.  This year, I made a delicious ice cream pie with a clock face.  I used gluten free Joe Joe’s cookies from Trader Joes to make an “oreo” crust, filled it in with vanilla bean ice cream, and poured homemade chocolate fudge frosting over the top.  While it was setting in the freezer, I made a clock on wax paper out of melted white chocolate and placed it on top of the frozen pie.  We also included gummy worms for the “non ice cream eater” in our family.

10:00 pm: M&M’s, Marshmallows, and Straws     Game Time: I found this idea under “minute to win it” games on Pinterest.  I set the table with two paper plates for each player.  One plate contained M&M’s and marshmallows.  The other was empty.  Each player was given a straw (cut to about 3/4 size).  At my “GO” the players had to suck up the candies and mallows to make them stick to their straw and transfer them from one plate to the next.  The first player to get all of theirs transferred had to call out “Happy New Year!”  Micah for the win!

11:00 pm: A Big Bag of Skittles     Make a rainbow science experiment!  I had seen a couple of videos on youtube of this simple and fascinating science experiment, so I thought it would be a fun way to keep my tired children awake that last hour before the ball dropped.  Check out our “make a rainbow” video!

12:00 pm: Cups for Sparkling Cider and Party Horns     We opened our final bag about 10 minutes early.  Little Sister put on her party hat (she was the only one willing to wear one this year).  We filled our cups with cider and got ready to ring in the New Year!  We found a countdown on TV, and when the clock struck midnight, we ran outside yelling Happy New Year!!! Oh, and Micah finally got the chance to use that blow horn he got for Christmas!

Who doesn’t love a good old fashioned Nerf Battle?  My 10 year old son was who I had in mind when I added Nerf Wars and Target Practice to our Advent activities this year.  But let’s be honest…this is fun for any age…even the grown ups!

We started our evening by creating these spinning targets, which were a big “hit!” I prepared everything ahead of time by cutting circles out of empty food boxes and setting out markers, tape, two circles per person, large craft sticks, straws cut to size, pennies to weigh the spinners down at the bottom, a piece of string, and a couple of push pins.  Then we sat down at our coffee table to create.  Check out my tutorial to see how we made the spinners.

Next we each selected our Nerf Gun, grabbed a couple of soft bullets and had target practice.  We also stacked up some red cup pyramids to shoot down and then ended our evening with a boys vs. girls living room Nerf Battle, using a jump rope to divide the room in half.  The last one standing was the winner.  Want to know who the epic champion of the night was?  You guessed it…little sister for the win! 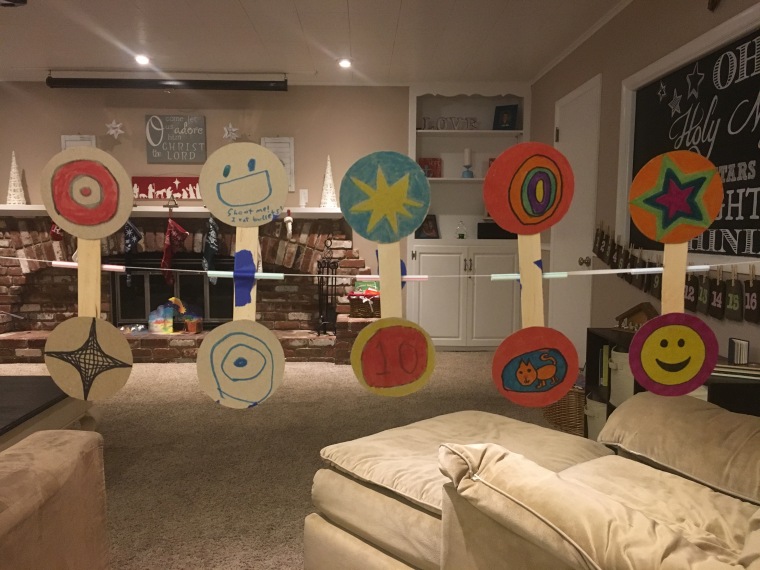